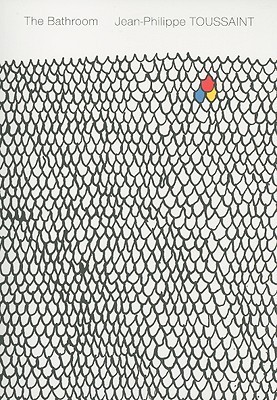 I have just finished a rather perplexing book. Perplexing in the way that only French things can seem perplexing to those not well versed with the deeper intricacies of the French culture.

The Bathroom is about an unnamed narrator in Paris who spends his days living in his bathroom. In his desire to achieve extreme immobility, he goes over the principles behind trying such a thing in different ways. The book is filled with many arguments for such a case, one of which is the narrator trying to understand how best to watch the rainfall. Eventually, he deduces it best to ‘watch’ the rainfall by looking at rain in two ways - one, by staring at one fixed point and watching all the rain fall through it, and two, by fixing the gaze upon one drop of rain and following it through to its combining with the ground. In all this, Edmondsson (his wife? girlfriend?*) and the two Polish painters in his house (who end up not actually doing any painting but returning later to randomly skin some octopuses in his house?) enable his desire to remain in the bathroom. There is not much more to the overall story except that one day he receives an invite to the Austrian embassy and he realizes that “perhaps it was not very healthy, at age twenty-seven going on twenty-nine, to live more or less shut up in a bathtub.”

I’m not sure what to make of this book. The writing is good, even great at certain parts, but there’s a point where the narrator, accompanying his doctor and his doctor’s wife to a tennis match, stares into a mirror at his dimly-lit face and asks himself: “what was I doing here?” There were multiple points in the book where I had the same question.

* I’m not sure if Edmondsson was the wife or the girlfriend because the narrator at one point refers to her as his wife but the summary on the back cover refers to Edmondsson as his girlfriend. Not sure if this is all an elaborate joke at this point, or that I just didn’t get the point of the book.