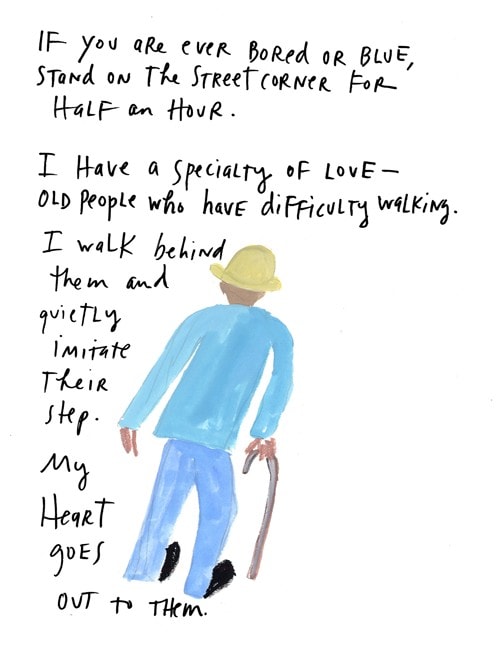 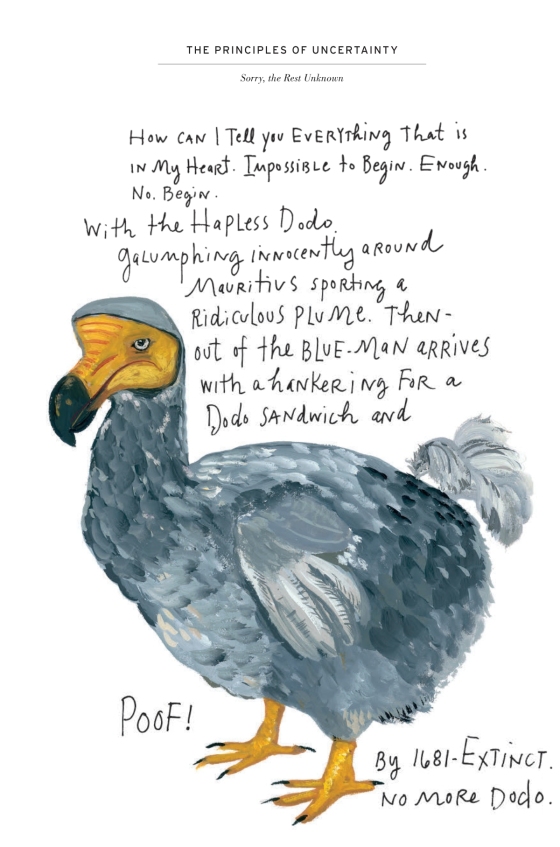 Maira Kalman - The Principles of Uncertainty

Can you imagine being so alone, so helpless that you’re stuck in the middle-divider of a busy road on an electric wheelchair with your batteries bust? I couldn’t even picture something like this happening until I saw it happen to someone today. It rattled me a little.

All the time of our lives that we spend on growing and building our community and then we go out alone. On my way back from work I cross a four lane road that, around office rush-hour time, is bumper to bumper traffic. Bad enough that cars frequently spill into the box trying to make it past the traffic lights. There’s only about ten seconds of a walk signal on this crossing. It’s not bad, can be done easily enough even if all you’ve got are jello-legs.

Today, though, while walking up to the intersection, I saw an old man on one of those electric wheelchairs stuck in the middle of the road fiddling with the controls on the right handle. Initially I just glanced at him and didn’t pay much heed (the limits of our attention, right?). It really only struck me that there was even a problem when I was already halfway through crossing the road and the guy still hadn’t moved, was still fiddling with the controls. (There’s a fairly decent-sized divider in the middle of the road so he wasn’t literally on the road or in danger.) Since I was crossing from the other side, I decided I’d cross back and help him out (that darned ten second timer) but when I got to his side there was already a student who, having crossed up to the same point as the old man and mid-way having noticed his immobility, asked him if there was a problem.

Of course there was. I watched from the other end – though I couldn’t hear them over the traffic – and I saw the old man, obviously feeling embarrassed, denying the offer of help as if it was just a simple thing he could brush off any minute. Like someone just made a mistake and soon things would be fine. Like the wheelchair was just playing games on him. Not a problem. But we drop all our walls when we honestly need, and want, genuine help. I’m glad the guy stuck around despite the old man initially declining his offer. He wheeled him over in the next ten second interval as I stood on the other side, the angst-ridden equivalent of helpless.

On the other side, safer and what seemed to be a little bit relaxed, the man continued to fiddle with his controls, not acknowledging our presence. We didn’t mind. Life is hard enough. We stood around for a while unsure as to the extent of our responsibility. I asked eventually if we could call him a cab, but he refused. The student asked him if he could call someone who could pick him up. He refused. We looked at each other. Was there even someone?

I eventually asked if it would work, foolishly hoping for some kind of emergency-battery mechanism or something to prevent exactly these situations. Now searching through the cords for something under the seat, he said it would. Confident, short answers. After a few minutes and a few remarks from the old man that he was fine, and obviously otherwise being of very little help, we decided to leave. What can you do.

I walked away a little heartbroken, a little disappointed that for all the money and all our information and all the apps and all the people around on the busiest street in town, we couldn’t get a man home, couldn’t get him to safely cross the road with dignity and without fear - without that thought that will now remain etched in his mind as he whizzes around - that someday his wheelchair might run out of juice, a wheel might get caught in a pothole (happened as he was pushed across road) or it might just flat-out breakdown. Or maybe it’s happened before. How else was he so sure it would work?

I turned around after a few steps to check if he was still there but he wasn’t.